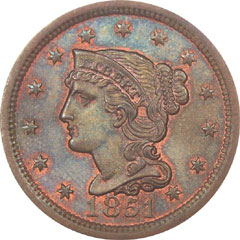 Mintage quantities stretch into the millions for all but one issue of the series. This makes the coins readily available across circulated grades with premiums for higher grade examples, particularly those which retain original mint red coloration. The lowest mintage occurred in the final year of the series when 333,546 pieces were struck. This issue commands a modest premium across all grade levels.

The table below indicates the mintage for each year of the series. Note that for the year 1839, the mintage figure accounts for production of both the prior Matron Head type and the Braided Hair type.

Coins For Sale on eBay